We’re sorry it’s taking us a bit longer to answer your calls at the moment.
Please see our COVID-19 related FAQs and details of our customer service options.
More information

Northern Ireland was the backdrop for many parts of Westeros. Explore the Seven Kingdoms from the North to Dorne, with several GoT locations along the route.

With a total travel time of just over 11 hours, this trip could be spread out over a weekend, and is jammed packed with history and awesome vistas for good measure.

With the release of Season 8 not scheduled until mid-2018, we couldn’t find a better way to keep the song of Ice and Fire fresh in your mind until then, by truly experiencing the locations at which some of the most memorable scenes were filmed.

Northern Ireland was the backdrop for many parts of Westeros. Explore the Seven Kingdoms from the North to Dorne, with locations from several seasons along the route.

With such a diverse landscape, you will quickly learn why it was chosen as the perfect location to bring the R.R Martin series to life.

Begin your voyage at Leitrim Lodge Car Park at the foot of the Mourne Mountains, and set off on the Mourne Way Walk. Follow the rolling hills and winding streams on this peaceful adventure through the “Irish Rockies.” This area is a lesser-known filming location for the show, but was used for at least two backdrops. This area is also where C.S Lewis got his inspiration for Narnia.

Travel time to next destination: 35 minutes

2. The Haunted Forest & Beyond the Wall / Tollymore Forest Park, Newcastle

Continue north towards Newcastle to Tollymore Forest Park, or The Haunted Forest. Peppered with beautiful gothic stone architectural bridges and arches, Tollymore Park is a spectacular setting which was originally part of an ancient estate.

GoT moment: This forest opens the show, with the Stark boys discovering the dire wolves here in Season 1, Episode 1.

Travel time to next destination: 35 mins

Carved into the County Down coastline is Murlough Bay better known in Westeros as Slaver’s Bay. After Daenarys freed the slaves in the that area, she changed the name to Bay of Dragons.

Travel time to next destination: 5 mins

Built at the start of the 13th century by John De Courcey, this castle is said to be one of the most beautiful of Normandy castles in Northern Ireland. With such a stunning vantage point, it’s not surprising that this castle was chosen for the show.

Travel time to next destination: 25 mins

The first site for Winterfell is the stunning ancient monastic site of Inch Abbey, also founded by DeCourcey in around 1193, and is nestled on the north bank of the Quoile River. 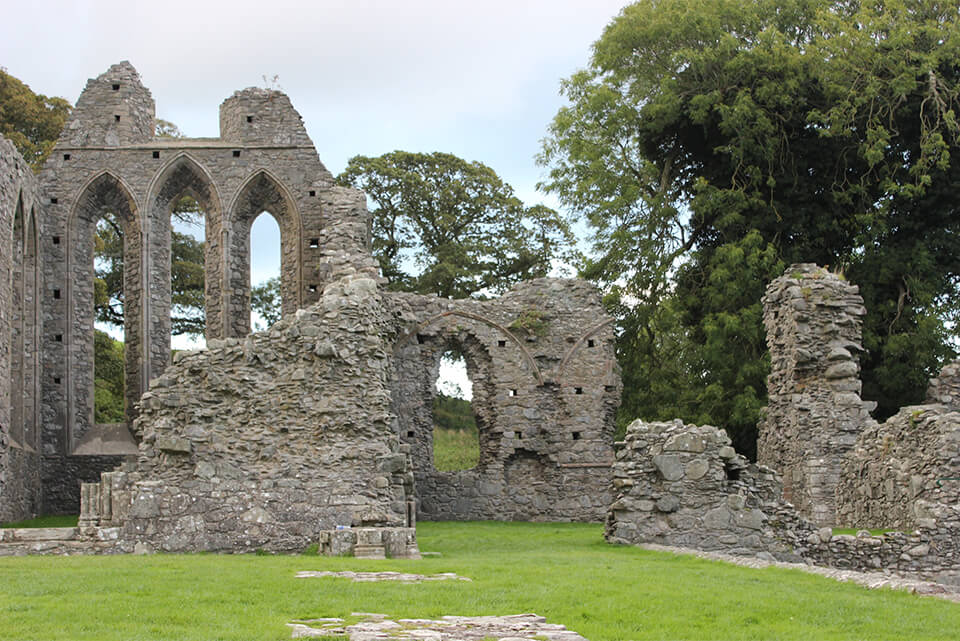 Travel time to next destination: 10 mins

Head for the north bank of the Quoile river that leads to Strangford Lough, and you will find the location for 2 major Winterfell sites.

Travel time to next destination: 16 mins

One of the most iconic locations in the Seven Kingdoms, the 820-acre walled demesne of Castle Ward in Co. Down provided a prime location for House Stark. Explore the grounds to get a real feel for the Northern scenes we’re so familiar with from our TV screens. Most of the Game of Thrones tour will include Castle Ward , immersing fans into the world of GoT.

Travel time to next destination: 10 mins

8. The Twins / Strangford Lough, Co. Down

Located on the banks of Strangford Lough, Co. Down, castles ruins (with some CGI-assistance) is morphed into The Twins and general Riverrun area. In the show, this is an important crossing – controlled by the Freys - for travellers from The North to the Western Riverlands.

14th Century Shane’s Castle, perched at the edge of Lough Nenagh lends itself well a multitude of location possibilities.

Travel time to next destination: 55 mins

10. The birth of the shadow, The Stormlands / Cushendun Caves

Known as the The Red Caves, east of the beach formed over 400 million years and served as the perfect dramatic backdrop for the harsh stormlands

Travel time to next destination: 35 mins

Orignally planted by the Stuart family to impress visitors as they approached the Georgian mansion, now Gracehill House, these iconic Throne’s trees are a natural phenomenon and are well worth the visit to Antrim. Unfortunately, some trees were badly damaged after Storm Doris. Visit Gracehill House at the end of the hedges, which is home to one of the many Game of Thrones doors, commemorating Bran’s transformation into the Three-Eyed Raven.

Travel time to next destination: 30 mins

Some of the dunes at Portstewart stand at 30 metres high and were formed about 6,000 years ago. This sandy landscape brings the harsh, desert land of Dorne to life.

Travel time to next destination: 30 mins

The 120Ft cliff top, decorated with the Mussenden Temple (plus a bit of CGI thrown in for good measure) serves at the epic and austere island of Dragonstone.

Travel time to next destination: 25 mins

Hike up the Binevenagh Mountain, to the edge of the Antrim Plateau. The summit spans over 6 miles, which serves as the grasslands outside of the City of Mereen. The hike starts at Leighry Road as is 4.5KM long.

The longest journey time is the final leg of the Ultimate Game of Thrones Roadtrip, but we’ve saved the best for last. The Marble Arch Cave Geo Park is a stunning place of natural beauty, with hikes and activities suitable for everyone. Plan your day here: http://www.marblearchcavesgeopark.com/

Through the beautiful Belmore Forest walk, you will reach Pollnagollum Cave which features a 12-foot limestone waterfall. The forest and the cave are a part of the Marble Arch Cave Geopark.

* Before you set off on the Game of Thrones roadtrip, make sure your car insurance cover is up to date.